Before coming to Holy Trinity, Fr Richard was for most of his working life a teacher and School Chaplain. After training for the priesthood at St Stephen’s House, Oxford he served his title parish in the mining and steel-working parish of St Mary, Rawmarsh just outside Rotherham in South Yorkshire. From here he moved in 1995 to Wellingborough School in Northamptonshire where he served as Chaplain and Head of RE/RS. He also helped in the local parishes of St Mary, Higham Ferrers and St Mary, Wellingborough. In 1991 he became Chaplain and Head of RE/RS & Philosophy at Merchant Taylors’ School, Northwood, Middx. During his time here he helped initially at St Mary, Bourne Street and then at St Magnus the Martyr, London Bridge. In 1996 he was appointed to be a Priest-in-Ordinary to Her Majesty The Queen based at St James’s Palace. 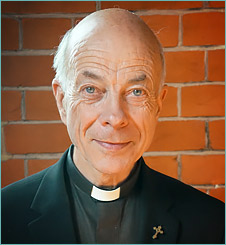 After training for the priesthood at Lichfield Theological College, Fr John has spent all of his priestly ministry in the Diocese of London. He served his title at Little Stanmore and then moved to Harefield. He has been at Holy Trinity since 1996 as an Honorary Assistant . In his time he has served as a JP and now has an active ministry at the North Lindon Hospice where he is one of the part time chaplains.